Looking for a fun and engaging way to teach grammar. This post include three  +1 different lesson resources with 8 pArTs, a Quiz, followed by a template for MEME (Thin Slides) and examples. Feel free to make a copy for yourself. Hope your students' enjoy these lessons, my 6th graders loved the creative aspect of these lessons and making MEME at the end of these lessons.

I modeled an example for them. Then students and I created one. Next, they worked independently. You can also show them an image and ask them to come up with a sentence. 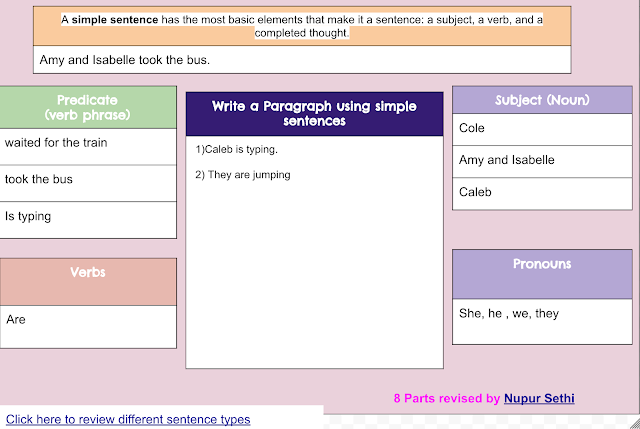 Opinion vs Persuasive vs Argumentative Writing

"7th graders, I will be teaching you how to write an argumentative writing," I announced.

"We already know how to write, learnt it in 5th grade!" they said in unison. "We know how to express an opinion and persuade people."

Guess what came next, an actual argument between student and I about the differences between opinion, persuasive and argumentative writing. They are a stubborn crew, it was the moment to drop my existing lesson and think quickly how to  teach the difference. I love that about teaching, lets me think on my feet! What was hard to see how deeply was this confusion entrenched in them!

Thank goodness for Quizizz. I quickly whipped up and combined few quizizzs.


Opinion vs Persuasive vs Argumentative purpose and the structure


They took this quiz and obviously they bombed the test. I presented these three examples and we continued to argue about it. Does it seem like an argument is the common thread here? 😉I love these kiddos, an exciting challenge!

✍Opinion- I think there should not be  school uniform because as kids  we want to be creative and cool.


✍Persuasive- I wrote an article telling you that you need to buy a fidget spinner or else you will never be able to concentrate in class again. I will only tell you the importance of getting one and how it will make your school life better.

✍Argumentative- Because of how many people are affected by smoking, the amount of money has been spent because of cigarettes and the people who haven’t smoked but died because  someone smoked near them, cigarettes should be banned.


I did a kinesthetic movement acting like a scale to show them the difference, opinion has only one side, persuasive is tipped on one side and argumentative is balanced 60:40
⚖

READ MY OTHER BLOG-Second Wind